Posted at 17:47h in autumn, Bible Study, birthdays, Camilla, celebrations, Family, friends, gifts, Milestones by Alison Treat 4 Comments
0 Likes
Share
So last year, when Camilla turned one, we invited LOTS of friends and family for a big party at our house. I think we ended up with around fifty in attendance. This year, I decided to keep it small–we only had forty. Since our local family alone (and I mean, immediate family–Todd’s and my brothers, sisters, and parents) numbers twenty or so, keeping it small isn’t easy. I also decided to invite some of Camilla’s little friends and their parents. I guess that’s how we ended up with forty. I collapsed after all the brou-ha-ha, wondering why I do this to myself when soon enough she’ll be asking me to invite all her friends over. Oh well–it was great to see everyone and the kids had a blast. Camilla’s little friend Ethan kept pursuing her, but she would have none of it. Her daddy was very happy about that! 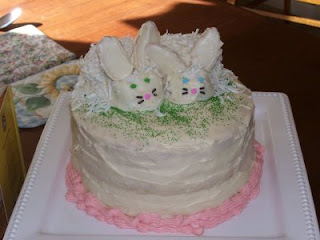 I must say I’m really proud of how the cake turned out. I kept asking Camilla what she wanted on her cake. At first she wanted Elmo, like her friend Maggie, but I doubted my ability to pull that off. So I asked her if she had any other ideas and she said, “Bunny!” Actually, “Nunny!” She can say the b-sound now, so I can’t figure out why she says “nunny” instead of “bunny” but whatever. Her pediatrician told me, “Give her a break, she’s only two!” So, I planned to make the famous cake from my Anne of Green Gables cookbook. My mom and I have been making this cake for twenty years, but for some reason both of us had trouble with it this year. I ended up making four layers instead of two because each layer came out of the oven looking beautiful but immediately collapsed to about half it’s original size. I was very frustrated with this whole process. Then, my frosting kept sliding down the sides of the cake, no matter how thick I made it. Since I had so much trouble with the baking and frosting, I thought making the bunnies would be a nightmare. But it took all of fifteen minutes and I was thrilled with the final result! As I’ve said before, what’s the use of having a blog if you can’t brag a little bit? 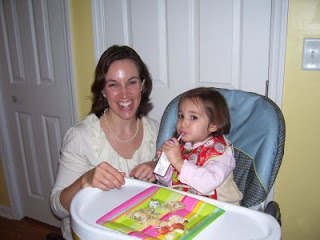 Juice boxes are a RARE treat in our house! 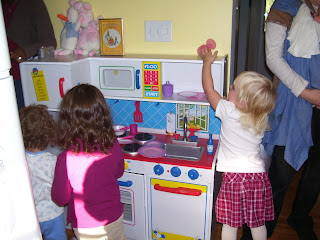 Everyone loved playing with Camilla’s kitchen! 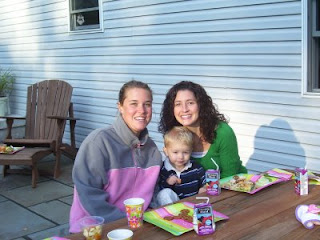 Alyssa, the infamous Ethan and his mommy, Sara. 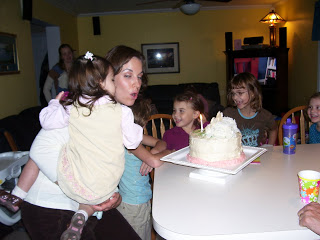 Camilla decided to be shy and miserable when it was time to sing Happy Birthday. She also refused to even attempt to blow out the candles. Eventually, she warmed up and had a good time. 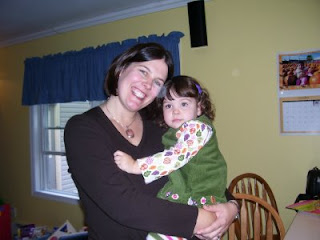 Maggie and her mommy, Peg. 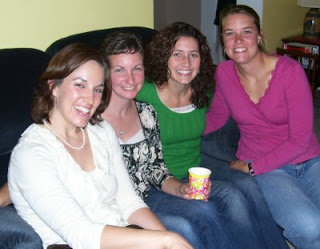 A picture of (most of) the old Bible Study girls.