Posted at 06:46h in Uncategorized by Alison Treat 1 Comment
0 Likes
Share
We are very much in summer mode here in the Treat household. June 1st was the last day of school for Camilla and it seems pointless to try to continue Adrian’s schooling while she’s home. So we’re sleeping in these days and following a very relaxed routine. Too relaxed, maybe . . . we’ll try to up our game in July so we can fit in all the fun stuff we plan to do before school begins again.
What I’ve been doing . . .
The first few days of June, we helped Camilla’s school move into a different building.
Hold it!
I ought to say, we helped Camilla’s and Adrian’s school move into a different building. That’s right. We’ve officially registered Adrian for school next year and I’m leaving the ranks of the homeschoolers. For now. We’re all excited about the new location—and about Adrian attending with Camilla in the fall. I’ll probably be a puddle of tears the first three days of school again, but I’ll get over it. It’s the best path for our family right now.
We attended a Shakespeare in the Park play—Julius Caesar. It was a satisfying interpretation and especially poignant during such a polarizing election year. (Yeah, I’m not going there right now. Not in this post, anyway!) I realized that Julius Caesar is one of the few Shakespeare plays I have not actually read, so I had to really pay attention during the action. The play is the thing, after all!
The second weekend in June, I took off to Austin, Texas for a writing retreat. Three out of four of the women in my old writing group got together to talk and write and plan for three days. I so needed this time to actually hear myself think for a change! It turned out to be much too short, but I made it work and came home with a plan. I’m writing more often and I’m more focused because I decided what projects to work on with the blocks of time I have. I’m not carrying out my plan perfectly, but it has helped immensely. On top of that, it was lovely to hang out with my friends, Demery and Pauline. We challenge each other and love each other in spite, or maybe because, of our differences. My life is richer for having the two of them in it.
When I got home from Austin, I had to face the reality of a kitchen that was still under construction.  Folks, I did not think it would take this long. Thankfully, we are able to use the kitchen for the most part. But the granite company measured for the countertops June 3rdand we’re still using our old Formica sitting on top of our new cabinetry! The new countertop is supposed to be installed Thursday. I thought we’d have moved on by now . . . Ah, well! This too shall pass. And the privilege of being able to remodel our kitchen is not lost on me. I just need to shake myself every now and then to realign my perspective. I’m kind of like an Etch-a-Sketch. Or maybe a Kaleidoscope?
What I’ve Been Reading . . . 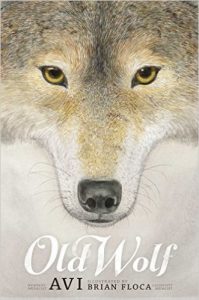 Upon reviewing my Goodreads profile, I realized June was a pitiful month in the reading department! The kids and I finished Prince Caspian. I think we were less enthralled with this installment, or perhaps just getting tired of Lewis’ slightly archaic language. We decided to take a break from the Chronicles for a little while and began Old Wolf by Avi. Unfortunately, Avi’s writing style did not impress me at all, especially when it came to dialogue. I willingly surrendered this one to Todd and he ended up reading most of it to the kids without me. He’s usually not a literature critic, but he wasn’t impressed either.
Somehow, we started TheVoyage of the Dawn Treader in spite of our resolve to read something else for a while. I guess we couldn’t resist the draw of Narnia for long. I’m enjoying this book, but we’re finding ourselves reading together less often because of all the other fun things vying for our attention. Picnics! Fireworks! Late nights!
As part of Modern Mrs. Darcy’s 2016 Reading Challenge, I started a book recommended to me by my child. BalletShoes by Noel Streatfeild. I had a hard time getting into it. Perhaps I heard too much of the plot while Camilla was reading it for school this spring. Or perhaps I’d heard it recommended by too many people (including Meg Ryan in You’ve Got Mail) and thus my expectations were too high. Whatever the reason, I’m enjoying it more now that I’m halfway through. And I’m determined to persevere to the end. Camilla and I want to watch the movie version together and I have to read the book first! 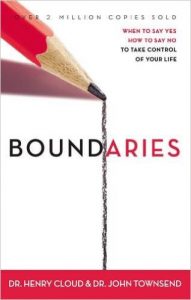 I’m in a haphazard book club—we meet once in a while to talk and drink tea or wine. We decide on a book we’d like to read, and some of us read it ahead of time. And sometime during the four or five hours we’re together, we might discuss the book. For a few minutes. Anyway, this is how I came to read Boundaries by Cloud & Townsend. I knew the concept of “boundaries” (and I recommend everybody learn about that!) but I’d never read the book. I’m listening to it now, on Overdrive, but it’s due tomorrow and there are holds on it. So maybe I’ll finish it when it comes around to me again. I forgot that I’m a visual learner, though. Self-help might not be the best genre for me to read via audio book. And our “Haphazard Book Club” met last week to discuss it. So I don’t have that incentive. But I hope to finish it one way or another.
In other categories, we’ve been . . .
Playing at parks. 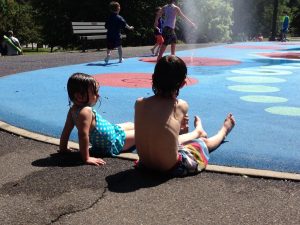 Waiting in enormously long lines to pay good money to have our faces painted so we could wash it off the next day. (Well, that was only one of us!)

Hiking in the woods.
Hanging out on the back porch with friends late into the night.
Ah, summer! Sadly such a short season! (Alliteration intended.)