It’s come and gone again, but in some moments I’m still celebrating. Today, for instance, as I listened to Casting Crowns singing “East to West”. Unfortunately, on Sunday I was at the worst point of a terrible cold, and keeping Camilla quiet in church was no fun, so my celebration happened the night before as I was going to sleep at almost Midnight. I realized with a rare newness the reality of the Resurrection. Sometimes I focus more on the sacrifice, which is amazing and precious in itself. But He didn’t stop there! As I went to sleep Saturday night I remembered a snippet of the Caedmon’s Call song “Valleys Fill First”:

And it’s like that long Saturday between your death and the rising day
When no one wrote a word, wondered is this the end

Suddenly it hit me what it must have meant to the disciples. Their savior was dead. It looked like Satan had won. And I felt like a kid at Christmas, because it was almost dawn and the tomb would be empty! There’s so much more to say, but that says it all. The tomb was empty. Satan did not, will not, win.

I have a lot of pictures of Camilla to post and now they seem out of place because they’re all of the surface celebration. I can’t post pictures of rejoicing hearts! I can only pray that Camilla will come to rejoice in her risen Savior even more faithfully than I do. And that reminds me of a poignant, if verbose, quote by George MacDonald,

A parent must respect the spiritual person of his child, and approach it with
reverence, for that too looks the Father in the face and has an audience with
Him into which no earthly parent can enter even if he dared to desire it.

Chew on that. And here are those pictures. 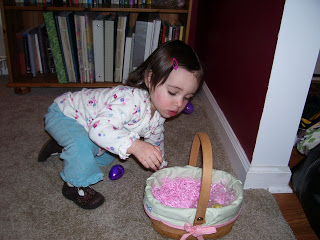 Collecting eggs during the Easter Egg Hunt at our house last week (indoors due to the rain). 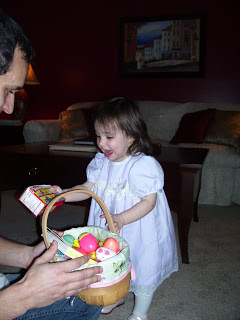 I wish I’d had the video camera rolling for this, but I couldn’t even snap a still picture fast enough. When she saw the basket, she ran over and brought it back to us. It was so adorable! 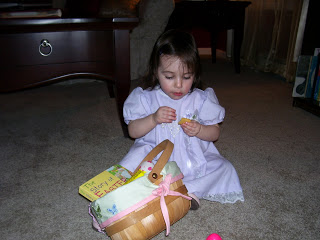