Posted at 19:29h in Blueprints, Third Day, writing by Alison Treat 0 Comments
0 Likes
Share
Lately God’s been asking me to surrender.
Last week, in Sunday School, our young adults pastor (and yes, I still qualify as a young adult!) made a comment about surrender. When we give things to God, He often hands them back to us in better shape than we could have imagined.
Now, it’s not as though I didn’t know this. I mean, I’ve done it before. But it seems that I have to re-learn it every few years. All of a sudden I realize I’m holding onto stuff—hard. And I have to peel my fingers off of whatever it is. The knowledge that God likes to hand stuff back to us might be reassuring, but that can’t be my motivation. Because that wouldn’t really be surrender, would it? Surrender requires completely letting go.
It’s almost an abstract concept, this letting go. You can’t just say, “Okay, I give that to You, God.” Well, you can. But it usually doesn’t work. At least, for me it doesn’t. I keep trying to take it back. I have to meet with God and really lay it down again and again and then keep reminding myself throughout the day, “I surrendered that. I give it to You, God.” 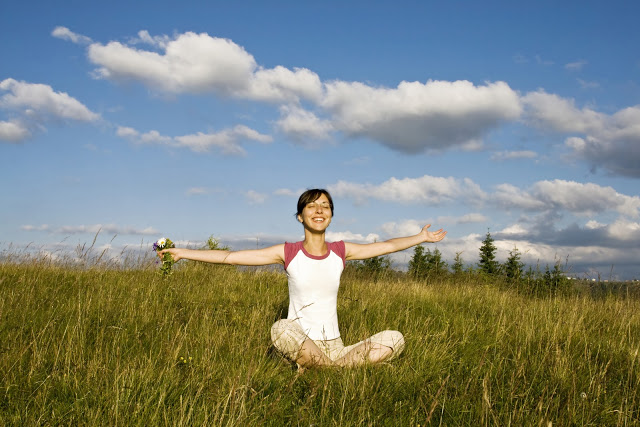 So I’ve been giving things to God—stuff I was holding onto. My dreams for the future. My goals and desires. My reputation. My appearance.

This past weekend I was praying for deliverance from my current thorn in the flesh. Then the Sunday morning sermon was about surrender and I realized He wants me to surrender this thorn, too. He might take it away. He might not. Either way, it’s His and I’m okay with His choice. I trust Him. And the thing is that I can’t control it anyway. The illusion of control is so seductive that I keep trying to hold onto things or take them back. But I don’t really have control. So it’s much better to give it all to Him of my own free will. He’ll take care of it better than I can.
So that was Sunday morning. Sunday evening Todd and I went to a Third Day concert.
I just have to note here that Camilla wept real tears over the fact that we were going without her. I mean, she wailed at the top of her lungs! I had to stop myself from laughing because I am not that great at teaching my kids about the groups we listen to. So this week we’ve been rocking out to their latest album and I’ve been telling her “This is Third Day. The guy singing is Mac Powell.” Next time she will have reason to be disappointed if we don’t take her with us!
The concert was awesome. Trevor Morgan, a great Christian indie artist, opened, followed by Tenth Avenue North, which is now one of my other favorite bands. They were amazing in concert. Lead singer Mike Donehey came into the crowd singing “You Are More”, touching people, shaking hands . . . I just loved his heart for people.
And then there was Third Day. God used Mac Powell and Third Day to bring home this theme of surrender in my life. It’s truly amazing to listen to a hugely talented band sing songs straight to Jesus. And to hear the lead singer talk candidly about something you’ve been dealing with already. But really, why should I be surprised? Who is Mac Powell other than an instrument of the God we both serve? 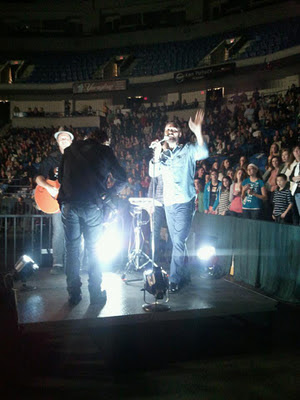 Mac talked about how everybody wants to give God the bad stuff (our failures and weaknesses), but nobody wants to give Him the good stuff. We’re afraid He’s going to mess it up somehow. Mac said he was afraid to give God his talents for a long time. He urged us to find that one thing we needed to give to God and make tonight the night we surrendered. So we’d always remember this night. Years later we’d say, “I can’t remember who the band was, but I know there was a concert and that was the night I gave it all to God.” And then Mac Powell sang “What Have You Got to Lose”.
That’s when I realized what I was still holding back. I gave Him the good stuff too. Now He can do whatever He wants with my writing talent. My hopes for an actual career writing books—yeah, He can have them. And to some that may sound like giving up or not trying, but that’s not what it is. I’m still going to work my butt off, and it helps to know the most powerful force in the universe is my agent. Because where I want to be, really, is in the center of His will. If that’s a place where my great-grandchildren read my stories and say, “This is pretty good. It should have been published,” that’s okay with me. And if my book is a New York Times bestseller and I have hundreds of thousands of followers, well, I don’t want to be there without Him. I’d majorly screw that up on my own. Make no mistake, I would much prefer the second scenario, and I’m smart enough to know that I’ll probably end up somewhere between the two, but at this moment, I believe I’ve truly surrendered and I’m okay with letting Him have control.
It’s a process though. I will have to learn this again. Maybe I’ll have something else to surrender. I’m sure I’ll have to surrender some of the same things all over again. But I have to tell you, God’s been walking me through this process with so much grace that I know He’ll provide what I need every step of the way.