I’m sitting at my laptop in my bedroom, with the baby in my trusted Moby wrap, surrounded by an unmade bed, laundry that has yet to be put away, papers that need to be filed, and bins of Christmas ornaments waiting to play their part in decking the halls. This is life with a three-year-old and an infant. I am in awe that seven weeks have flown by so quickly. As I held Adrian’s tiny wet body, fresh from the womb, I wanted to enjoy every second. And I have, but those seconds have passed faster than I imagined possible.

Birth is a miracle. The first time, I looked forward to it as a new experience, something I’d never been through before. I didn’t know what it would feel like because I’d never felt it. This time, although I knew I had done it before, I couldn’t imagine how. It seemed impossible that the beautiful little person I know as Camilla, my daughter, had actually come from my body. And that the new being I felt inside me this time, the baby boy who kicked and pushed against the inside of my skin as though he just couldn’t make enough room in there, would find his way into the world by the same route. I didn’t think I was ready for him. I didn’t know if I would be strong enough or have the endurance I needed during labor, let alone the patience for afterwards. How could I possibly love another baby as much as I loved Camilla? But I found out the second time exactly what I’d learned the first. Birth is an amazing, indescribable journey of the body, soul, and heart.

Sunday, October 11th, the three (well, the four) of us went for a long walk in the woods. Monday morning, I woke up early and noticed the first regular, slightly painful contractions from 3:30 to 4:30 am. I was excited, hoping it was the real thing, since it was my actual due date, October 12th, and I certainly didn’t want to wait too much longer. But after that hour, they died off. Later in the morning, before I left for my 40-week check-up, I had some bloody show. So I knew it certainly would not be two more weeks before we had this baby! I was only 2 1/2 centimeters dilated at my appointment, but the doctor took a guess that I would have the baby within 24 hours. She turned out to be right, even though I always insist that the doctor really doesn’t know. I spent the rest of the day finishing up the laundry and tying up lose ends, just in case. Irregular, slightly painful contractions continued all day. They became more regular in the evening, when I was on the phone with one of my brothers. Todd and I went to bed around ten and that’s when things really started happening. In between contractions, I felt fine. I didn’t want to rush to the hospital. I actually dreaded the hospital because I was afraid things might slow down and the doctors would encourage Pitocin. Or if my water broke, they’d put me on the clock. I’d heard too many stories of uncooperative doctors at the hospital I was headed to. So I wanted to labor at home as long as possible. But soon I told Todd he’d better time the contractions. We were supposed to call when they were five minutes apart, lasting for 45 seconds to a minute, for one hour. But my labor doesn’t progress by the book, of course! I would have a few contractions four minutes apart, then a six minute break. And they were only lasting 30 seconds. Finally Todd told me I’d better get dressed (before I couldn’t get dressed!) and he called the doctor. The doctor told us to come in, so we made our slow way to the car. Riding in the car wasn’t too bad–I just tried to relax and breathe through each contraction, while Todd talked me through them. Getting from the car to the maternity ward was more of a challenge. I stopped for each contraction, leaning on something for support. Several people asked if I needed a wheelchair, but I just wanted to be left alone!

We finally arrived in the “labor and birthing suites”. On our tour, we had been told that when I arrived in labor, I would go right to a suite. In actuality, my nurse, Ashley, steered me towards triage. I’d been in triage here twice before, so I was not happy about this. I knew I was in labor, the nurses could see I was in labor, but I had to wait for the doctor to tell me I was really in labor before they took me to a private room for the birth. When the doctor finally checked me I was six centimeters! He said, “You’re not going home.” No kidding. But really, I loved the doctor. He wasn’t my OB, but I loved him as soon as he said he had looked at our birth plan and he was fine with all of it. He wouldn’t break my water or anything. The only thing he requested was an electronic fetal monitor for the baby’s heart tones. We expected that anyway, but we did not expect the doctor to be so agreeable. I was pleasantly surprised by the nurses, too. They seemed to have memorized our birth plan and reminded the doctor (and us!) of our wishes. When we got to the labor and delivery room, they put an IV port in my arm and Todd put on my relaxation music. To the sound of subdued music and ocean waves, I worked on relaxing through each contractions. It was hard. It was really hard. I’d forgotten how much it hurt. And on top of that, I kept getting nauseous and vomiting between contractions. Ugh! The contractions seemed harder to manage than they had with Camilla’s birth. I kept thinking I didn’t know if I could do it, but the idea of an epidural wasn’t appealing, either. Labor is such a different kind of pain. I couldn’t imagine an epidural making me feel any better. I just wanted to get through it.

Todd was amazing, as always. Ashley told me, “You have a good coach, here.” Later on, she said, “A lot of women would like to borrow your husband.” I know. I’m blessed beyond belief. My other nurse, Margaret, reminded me that my birth plan had asked that they not do excessive vaginal exams. “You need to tell us when you feel like something’s different, so we can check you.” That gave me a dilemma. I didn’t want to be checked too early and be discouraged by my lack of progress. But finally I realized I could be ten centimeters and not know it, still trying to relax when I could be pushing! So Margaret came and checked me.
She said, “You have just a lip of cervix, but it’s very soft. You can push if you want to.”
I couldn’t believe it. No wonder the contractions had been so tough. That was transition! I was amazed that I was so close to holding my baby. It was only 3 am!

My memory told me that pushing was much better than laboring because there was something to do during the contractions. That was true, but it also hurt more than I remembered. I couldn’t imagine how it was going to happen until I was actually doing it. All of a sudden I was there on the bed with Todd and the nurses holding my legs. The doctor came in and I pushed so hard I thought my head would explode. Between contractions, the doctor sat quietly waiting. Then another wave of inner pain and I pushed with everything I had. A small eruption and a splash. My water had broken. The doctor said he could see dark hair! Another few pushes and our baby’s head was out. One more and he was on my belly, in my arms. I held his wet, slippery body, felt his glorious newness and cried with him, welcoming him to the world. Our baby boy, Adrian Franklin, was born at 3:29 am on October 13th. He was 7 pounds, 11 ounces and 20 1/2 inches long. He is the most beautiful boy I’ve ever seen. He nursed there in the delivery room and the joy I felt was so real. I became a mother again in that five and a half hours of labor. With the help of my loving husband, and patient nurses, I gave birth to a son. And with the amazing capacity that God gives the human heart, I love him as much as I love Camilla. 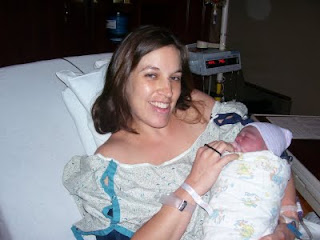 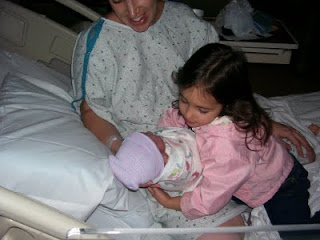 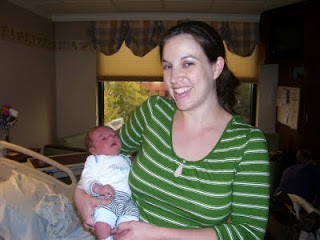 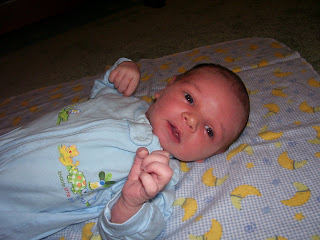